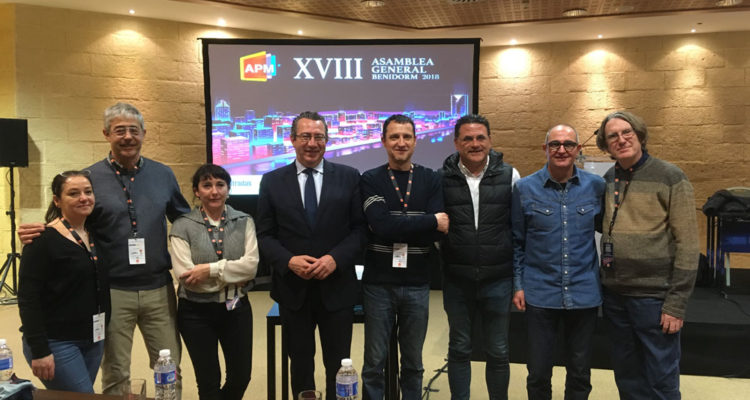 ELMA members and partners are proud to announce that the Music Promoters Association of Spain (Asociación de Promotores Musicales APM) will join the European Live Music Association (Elma), a decision that Albert Salmeron (President) and Tito Ramoneda (Vice-President) announced following the 18th General Assembly of the Association during which members voted for the adhesion of APM to ELMA.

The Music Promoters  Association of Spain (APM), which represents more than 80% of music producers & promoters of the live music sector in the country, joins the European Live Music Association (Elma), as decided in majority this Thursday in the framework of the XVIII Assembly of the entity, held in Benidorm.

Vincenzo Spera, president of Elma and Assomusica (association of Italian promoters) and Georges Perot, co-founder and member of the board of directors of Elma and NPO MESO events (Hellenic Music Day Organisers Network), have presented aims and goals, as well as projects.

“Promoters not only create culture and socialization but they support economy” Spera assured. “We are the heart of the live music sector and, however, until now we had no voice in the European Union” added Perot.

For this reason, they have argued, Elma was born in 2015 as an international non-profit association, aiming to operate as a European umbrella of associations, companies and professionals, to support the sustainable development of the live music industry even in countries where musical promoters are not yet associated, to support European Institutions define road map for current and future needs and to join forces to lobby at National and EU level.

Among its objectives, Elma aims to measure the live music business in Europe through the data generated by its partners and to issue credible proposals for short and long term solutions, to present to the European institutions.

Thus, Elma aims to identify the common problems and needs of the European music sector, support a system that helps and promote new talent and provide innovative models within the framework of the European Union: promoting mobility, exchanges and business opportunities.

“The main objectives of the association are to lobby and influence European legislative policies”, Perot continued, who has maintained that the association acts in three complementary topics: harmonization of national and European policies, support of educational, entrepreneurial and training activities and finally research and mapping initiatives, both at regional and national level.